The system is mainly composed of four-wire resistive touch screen, touch screen controller ADS7846, and single-chip 89S51 . The system block diagram is shown as in Fig. 1 .

Communication between ADS7846 and AT89S51

ADS7846 is a digital-to-analog conversion chip produced by BURN-BROWN Company for four-wire resistive touch screen. Inside there is a measuring circuit network composed of multi-channel analog switches and a 12 -bit A/D converter. When working, the 7846 opens the corresponding switch channel according to the different command words received by the data input port DIN , and accepts the returned analog voltage, obtains the corresponding digital quantity through A/D conversion, and then transmits it back to the single-chip microcomputer through DOUT .

The communication between AT89S51 and ADS7846 is mainly carried out through the I/O port of the one- chip computer and the five pins of CLK , CS , DOUT , DIN and BUSY of 7846 . When the system is working, the microcontroller first selects 7846 through the chip selection signal , and then sends the command control word data to 7846 through DIN , and matches the corresponding timing pulse through the CLK pin. When the BUSY bit is set, it passes through the DOUT data output port Get the 12 -bit conversion result.

You can calculate RTOUCH, which is the value of pressure Z ( where RX-plant is the x- axis resistance value, which is related to the performance parameters of the touch screen, and X-PosiTIon is the X- coordinate value obtained at the beginning ) .

It is worth mentioning here that Z1 and Z2 are still 12 -bit A/D converted digital values â€‹â€‹after conversion, but the Z value obtained by the conversion formula is actually the resistance value of the two ITO oxide films between the contact points . This completes the three-dimensional information collection at a certain moment. According to actual requirements, use the timer to set the sampling time to 10ms . The collected data is sent to the PC through the USB interface to be saved for subsequent matching processing. At the same time, the collected data can be displayed on the LCD screen for observation while writing. 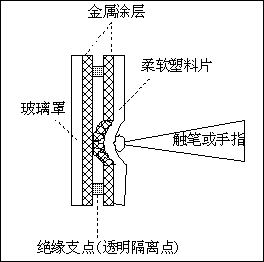 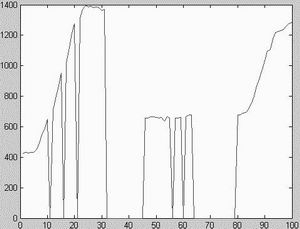 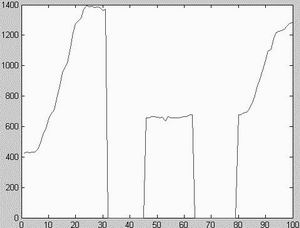 Because some edge parts of the touch screen are invalid touch areas, the actual converted X and Y coordinates are not from 0 to 4095 , so initial calibration is required, and the entire range of 0 to 4095 is linearized through the conversion formula , the conversion formula for the X-coordinate value X = (X-Xmin) & TImes; 4095 / (Xmax-Xmin), wherein Xmax and Xmin are the maximum value and the minimum value of effective area in the X direction touchscreen touch. Similarly, the conversion formula corresponding to the Y coordinate value is Y=(Y-Ymin) &TImes; 4095/(Ymax-Ymin) , where Ymax and Ymin are the maximum and minimum values â€‹â€‹of the effective touch area of â€‹â€‹the touch screen in the Y direction, respectively . The pressure value represents the size of the resistance value, and can not directly reflect the size of the pressure. Therefore, according to the actual needs, it is converted into a pressure value of 0 to 256 corresponding to the size of the pressure. The conversion formula is Z=(Zmax-Z) &TImes; 256/(Zmax-Zmin) , where Zmax and Zmin are respectively the maximum resistance value and the minimum resistance value when the pen is in contact with the touch screen.

During data collection, zero points will appear in the continuous data. There are two possibilities for zero points: one is caused by the change of strokes during normal writing, and the other is because the touch screen is not flat enough or when writing. Jitter is caused by the discontinuity of handwriting. The method of difference is mainly to look at the discontinuity time, which is the number of consecutive occurrences of zero values. Generally, the discontinuity time caused by jitter is less than the set sampling time of 10ms , so the zero value generated by jitter is between two Only one valid data can appear in the middle, which can be considered as an invalid zero value, and the occurrence of two or more consecutive zero values â€‹â€‹can be considered as a valid zero value generated by a stroke change without processing. When a certain zero value is judged After the invalid zero value, linear interpolation is performed to compensate for the loss of data, that is, an=(an+1+an-1)/2 , where an is the invalid zero point , and an-1 and an+1 are an respectively A valid value before and after. Figures 3 and 4 are waveforms before and after treatment, respectively.

Due to the writerâ€™s pause while writing, repeated collections at a certain point are caused. Obviously, there will be a large error with the sample data in the subsequent matching. Therefore, it is necessary to delete the repeated data. Whenever the two points before and after are judged When the X and Y coordinates are the same, it can be concluded that they are duplicate points, then the latter point is deleted, and the subsequent points are used to fill in. This ensures that the collected data can truly reflect the handwriting information.

Phenolic paper laminated sheet is a hard, dense material made by applying heat and pressure to layers of paper or fabric, impregnated with a synthetic resin. These phenolics are approx half the weight of aluminum and their physical toughness resists abrasion, friction, impact, and material fatigue. Special properties fight off the corrosive action of water and many chemicals, increasing the service life and efficiency of your product parts. The insulating qualities of each grade, such as low dissipation factor and excellent dielectric strength, make them valuable for many precise electrical and electronic applications.
It is made of insulating impregnated paper impregnated with phenolic resin and baked and hot pressed. Has high mechanical properties. The heat resistance level is E level.