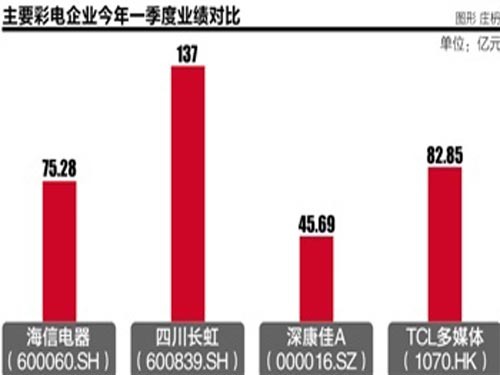 The â€œMay 1stâ€ transcripts of the color TV industry that had just passed did not continue to rise in the first quarter. This gave the industry another sweat for the year's growth.

On May 5th, Aowei, a well-known home appliance market consultancy, released sales data for the "May 1st" Golden Week this year, during which the retail volume of the color TV market was 3.51 million units, down 8.4% year-on-year; retail sales were 13.9 billion yuan, a year-on-year decrease of 6.6%.

In the first quarter of this year, the domestic color TV market experienced a short period of warmth after experiencing a period of severe cold in 2014. In the first quarter of 2015, the total retail volume of China's color TV market was 12.33 million units, an increase of 13% year-on-year; retail sales totaled 40.4 billion yuan, an increase of 10% over the same period last year.

In 2014, sales in China's color TV market experienced the first negative growth in more than 30 years. At the same time, the performance of several well-known color TV companies has also shown signs of embarrassment. This industry has reached an inflection point.

The reason, Ovi believes that this is related to three factors: First, the promotion period for the Spring Festival this year has been prolonged. Compared with 2014, the promotion period has extended for two weeks. The influence of node promotion has continued to heat up in January and February. According to Aowei's total channel data, the retail volume of the color TV market reached 9.41 million units in January-February 2015, an increase of 18% year-on-year. Secondly, since the launch of Jingdong and Ali, the penetration rate of e-commerce channels into the 3rd and 4th markets has increased greatly. According to Orville consumer research data, rural consumers have received 84% of the online shopping model. As rural e-commerce continues to mature, online scale will continue to rise and become one of the growth drivers of China's color TV industry. Third, the price of the upstream panel continued to decline, which also eased the market operation space of the entire enterprise to a certain extent. In the first quarter of 2015, the prices of all sizes of panels have declined, among which UHD panel prices have fallen more than FHD, and large-size panel prices have fallen more than medium and small sizes. The price drop of the 55-inch UHD panel was most noticeable. The unit price in the first quarter of 2015 was US$7 less than that in December 2014.

However, this rare rapid growth does not seem to continue. Take this yearâ€™s â€œMay 1stâ€ sales situation as an example. Although the sales enthusiasm of merchants has increased, the consumerâ€™s response has been cool, with retail sales and retail sales falling by 8.4% and 6.6% respectively year-on-year.

Ovi predicts that the domestic color TV market will have sales of about 44.73 million units this year, a slight increase from the previous year. However, the companyâ€™s relevant sources said that from the â€œMay 1stâ€ sales this year, this kind of estimation is optimistic. Ovid will recalculate the data for the whole year, and the result may be the same as last year or appear. Decline.

The short-term "supernormal" played in the first quarter is difficult to sustain and is closely related to the overall market situation in the color TV industry. At present, the color TV industry is experiencing greater pressure: from a macro point of view, the global economic recovery is still weak, the domestic economy is entering a "new normal", domestic and foreign consumer demand is insufficient; from the industry point of view, the domestic appliance market experienced after the withdrawal of stimulus policies Reorganization, color TV, refrigerators and other major household appliances consumer goods retail market have all experienced a decline; more importantly, under the impact of the Internet wave and cross-border competition, the home appliance industryâ€™s product form, business model, competitive landscape and industrial ecology still change. At the inflection point of fierce change.

Ovi believes that the main reason for the decline of the 51 color TV market is that, apart from the sales growth in the first quarter, the market demand for overdrafts, changes in consumer behavior, and other factors, including the current normalization of the entire industry promotion, leading to the peak season, especially the traditional node. Less promotional efforts.

Cao Shiping, general manager of Konka Multimedia Division, believes that after the May 1st market, the market will enter a dull period. In response to this situation, Konkaâ€™s approach is to focus on sales promotion. In the past two years, it has been implemented within a promotion period of 10 days. 10.6 billion yuan, 1.03 billion yuan in sales, this year will continue this strategy.

On May 6th, Zhang Junbo, deputy general manager of Konka Multimedia Division and general manager of the Strategic Market Center, said that Konka has taken a more active approach to price strategy this year, for example, directly valuing a thousand yuan for a 55-inch product with an original price of 4,999 yuan. And donate a 3-year extension service worth 399 yuan.

Ao Wei said that from the first quarter, in terms of prices, domestic brands to protect profits, the price decline is generally not large, only a small decline in the size of the product is more obvious. Japanese and South Korean brands have adopted a â€œprice increaseâ€ strategy for large-size products in an effort to increase market share. Among them, the 55-inch and 65-inch Japanese brands reduced the price by 8%.

In the case of sluggish growth in the total market volume, the adjustment of product structure and the launch of high-end products such as OLED, ultra-high definition television, large-size TV, and smart TV have become mainstream strategies in the color TV market. Taking LG as an example, this year it showcased "Next-Generation Display Technology" OLED TVs, 4K TVs, and Ultra-High-Definition Mega-Screen TVs in various cities such as Guangzhou, Beijing and Chengdu.